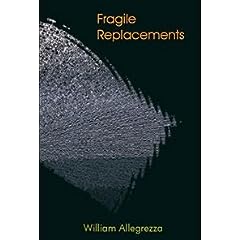 Much like Jack Spicer's conception of the poet as a radio that collects transmissions from the outer world, William Allegrezza sees the poet's role as someone who collects and arranges material from other sources. In The City Visible: Chicago Poetry for the New Century (edited by Allegrezza with Ray Bianchi), Allegrezza wrote regarding his own poetics: "A poem pushes us just outside what we know using language at once familiar and made strange. What we hear matters. What we read matters. What we imagine matters. As a poet, all those things filter into the poem as I sit with chaos and pull fragments from the semi-conscious realm of creativity. At times the sound, syllable, word, and line cohere; beyond that point, I have little control."

A hefty collection by poetry book standards, Fragile Replacements is divided into three sections comprised of over forty short lyric poems sandwiched between two long poems. From the opening passages of the book, the reader senses the poet is on a quest of some sort. What he is searching for is not important. What is important is the act of searching itself. This is perhaps most strongly demonstrated in the first section of the book, a long poem titled "Go-between.""Go-between" is composed of 42 numbered sections, each one written in correspondence with the sections of Dante's Vita Nuova. The fragmented pieces are marked by the uncertainties of a relationship and build to a narrative of love and loss, “as though each verse is a journey.” At the conclusion of Allegrezza's poem the journey reaches its destination. The final lines read, "i have written through you into the new life which / here begins." Though we seem to arrive at a certainty, it can be presumed that this new life will also be lived as the previous one -- fluxuating between moments of rest and restlessness, and equally full of uncertainties.

Throughout the collection, Allegrezza follows the path of what Fanny Howe called the spiral-walker in her essay “Bewilderment”: "For the spiral-walker there is no plain path, no up and down, no inside or outside. But there are strange returns and recognitions and never a conclusion." Allegrezza writes within the tradition of visionary poets from Dante to postmodern visionaries like Hannah Weiner. Voices are woven into the text in a variety of ways, from seemingly disconnected quotations to long strains of oddly capitalized enjambments: “RISeNEarLYANDBEgiNningToPlaYATBeIngVisionArY.”

The final section of the book consists of another long poem. "Gathering Forces" adds a more aggressively visual element to the lyric than previously used in this collection. Large fonts in various shades of grey are used alongside the standard size font employed in the rest of the book, phrases repeat in blocks, and numbers are scattered across the page as if they have been casually tossed down and recorded where they landed. On some pages Allegrezza literally obliterates the text: large black letters and sometimes words appear on top of blocks of smaller text, rendering the background text illegible.

This blocking out of words serves as a reminder that we cannot have everything. We cannot access all the text on the page or catch all the references, allusions, and voices, but we are able to access that which remains -- the fragile replacements that exist in place of didactic conclusions. In “Gathering Forces,” Allegrezza writes:

we listen
to others
speaking
softly
over fires
burning
late at
night
and know
that they
are
gathering
forces
by keeping
fragments
alive.

Keeping fragments is all that one can do and it is important work. The poem concludes: “our hands / are held out— / we are not asking / but giving / fragmented bits of a world.” Within the openness created in the fragments, there is space for the reader to bring in his or her own experiences and references, stretching the poet’s personal experiences and visions into something more universal. Allowing that space for one to enter the work is an act of generosity, and Fragile Replacements is a generous collection of poetry.