The Foxes of Harrow by Frank Yerby 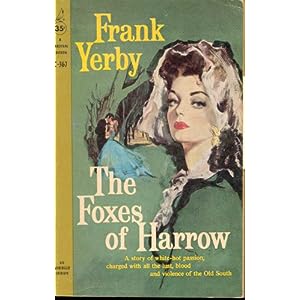 Frank Yerby was one of the most prolific and financially successful African-American writers in history. Fifty-five million copies of his books have sold worldwide and he wrote more than thirty novels. This year marks the sixty-fifth anniversary of one of his groundbreaking achievements: he was the first African-American author to sell a novel to a major Hollywood studio. The Foxes of Harrow, Yerby's first book, was released by Twentieth Century Fox in 1947.

Yet few people seem to remember Frank Yerby outside of the academy.

Critics connect this state of affairs with what's taken to be Yerby's renunciation of the "protest novel" projects of African-American authors in the middle of the twentieth century. Instead of fighting against segregation in his fiction, so the story goes, Yerby absconded for Europe in 1951 and published most of his work from Spain, where he raced cars and fattened his wallet with proceeds from romance bestsellers. For the last forty years, defenders of Yerby have attempted to justify the fact that he wrote romance novels, suggesting that he dodged confrontations with racial issues in order to publish on his own terms. According to these readings, the value of Yerby's work arises mainly from his rejection of expectations imposed upon his generation of African-American writers. But a reading of The Foxes of Harrow presents an opportunity for rethinking Yerby's handling of racial themes, and suggests that we should reconsider the importance of his work among mid-century African-American writers like Wright, Hurston, and Ellison.

The circumstances surrounding publication of The Foxes of Harrow read like a potboiler: the young impoverished author struggles against the odds and ultimately proves successful thanks to a combination of perseverance and luck. Boston University Professor Gene Jarrett complicates this narrative in his book Deans and Truants, citing Yerby's serious frustration with the "critical and commercial burden imposed by New Negro radicalism on a generation of black authors." Yerby's difficulties arose in part because of aesthetic demands to write a particular kind of novel. His attempts to sell his own protest fiction failed because he portrayed successful black men, defying conventions of what had become an entrenched genre. Publishers expressed little interest in uplifting narratives and favored books by that dealt overtly with the injustices of a system rigged against blacks. Yerby's luck changed when he moved to New York and met Helen Strauss, an agent looking for young clients. Strauss won him an audience at Dial Press and his first assignment grew into Foxes. The novel made Yerby wealthy overnight -- Dial sold two million copies in three years -- and Twentieth Century Fox bought film rights for a sensational $150,000.

The Foxes of Harrow stood out, in part because it featured a white protagonist: a pre-Civil War plantation owner named Stephen Fox. Publishers had blanched at a novel that portrayed a successful black protagonist, so Yerby made his main character a red-haired, blue-eyed, freckled Irishman. Set in New Orleans, the novel recounts Fox's escapades between 1825 and 1865. Critics took Yerby's subject matter as an effort to deracialize the plot. Reviews in both "mainstream" and "Negro" papers hailed the novel as an achievement in historical genre fiction, citing Yerby's perceived rejection of protest fiction and downplaying his treatment of race. Ben Burns, a white editor for the Chicago Defender (a "Negro Paper"), emphasized the significance of Yerby's decision to write about a white family. Yerby broke the rules, he claimed, "abandoning all past traditions which [...] seemed to limit Negro authors to Negro themes." Richard Match of the New York Times agreed, writing that the novel offered scant "evidence of the Negro's deep resentment against slavery."

But antebellum New Orleans provides a rich tableau of racial relations for the novel to navigate. Yerby describes it as a hodgepodge of white Americans, slaves, free blacks, Creoles, Cajuns, mulattos, and "quadroons" of mixed racial background. The city provides a space for blurred racial identities. Moreover, Yerby's character Caleen -- the most prominent of Fox's slaves -- consistently undermines structural racial inequality. Caleen resists the established system of slavery, manipulating it from within and opposing the use of violence as a means of winning freedom. Her tactics seem to mirror Yerby's own strategy in the composition of Foxes. Yerby's novel rejects conventions that called for an aesthetic of protest. As Jarrett insists, "the race problem was always a theme for him. He just wanted to keep his creative options open."

Fox arrives in New Orleans at the outset of the book and sets to work amassing a fortune, building the Harrow plantation, marrying Odalie Arcenceaux, and ensuring his legacy. When it comes to slavery, Stephen waffles. Though he declares, "there is nothing on earth so repulsive as a black," he has an affair with Desiree -- one of the city's many mixed-race "quadroons." His marriage falls apart and Odalie dies giving birth to a second child. But Fox recovers, marries Odalie's sister, and sends his son Etienne to France for an education. Amid the gathering storm of the Civil War, he waxes abolitionist out of expediency, arguing the South should:

Free the Negroes by gradual emancipation -- and retain them upon the land under small wages and our patronage. [...] We could limit their movements and control them as well as now, and remove at the same time the squeamish ethical questions that plague the North.

No one heeds Fox's advice. At the end of the war, he and Etienne walk through a destroyed New Orleans, discussing the fate of Harrow. Etienne concludes, fashion befitting the novel's turbulent emotions, "We must never rebuild it. Leave it as it is so that never in any generation will any man of our blood forget."

Beneath the surface of white aristocracy lies a foundation of exploited black labor, and among the slaves Caleen emerges as Yerby's most significant character. Even as she maintains order at Harrow through careful conduct of her relationship with Stephen, she quietly pursues the goal of ensuring that her own descendents escape slavery. Stephen wonders aloud whether he actually owns Caleen, or if her influence over him has reversed the power dynamic. Caleen offers, "'We own each other.'" Rather than advocate vocal or violent protest, Caleen operates within the laws of slavery, biding time and eventually achieving her desired goal -- helping her grandson Inch escape to the North.

She arrives on the plantation along with her son early in the novel. Stephen insists that he doesn't want any "African brutes" and buys illegally imported "Saint Domingue blacks," initially rumored to have incited a slave rebellion in the Caribbean. Caleen's group has a questionable legal status, and it becomes evident that several of them participated in a brutally repressed insurrection in New Orleans. The city hanged twenty-three slaves, the last of which was Caleen's husband. In other words, Caleen comes to Harrow having witnessed the failure of radical violent resistance. She tries to win Stephen's trust by aiding his project of building Harrow -- but only in the name of ensuring Inch's freedom.

Stephen comes to believe that Caleen has mystical powers and entrusts her with the care of his crops and the delivery of his son. But Caleen never reveals the origin of her medical and agricultural abilities. When pressed, she cites the privileged nature of her knowledge: "'Secret!' Caleen snapped. 'No good for white man to know!'" Instead, Inch will become the recipient of all her skills, promising that "his body will they enslave, yes, but never his mind and his heart. I will teach him." Part of this wisdom involves dissimulation. She says, "He must outwit his enemies as she had for so many years outwitted them. In seeming surrender, he must conquer."

Caleen's knowledge, and moreover her tactics for navigating and ultimately breaking the established racial order serves to liberate Inch. At the end of the novel, Inch becomes the police chief of New Orleans and confronts his former masters. He acknowledges that perhaps "This came too soon. We weren't ready. White men will rule the South again," foreshadowing the coming of Jim Crow. But when Etienne insists that blacks will never have equality, Inch retorts, "'Never is a long time.'"

Yerby did write romance novels. But genre snobbery risks brushing aside his significant accomplishments in the publishing industry, and ignores the way race actually operates in his books. In the case of The Foxes of Harrow, Yerby's ability to work find success within the literary establishment, and to find flexibility to embed racial themes in a sprawling plot, allowed him to reach far more readers than many of his contemporaries. When it comes to questions of African-American canon formation, Yerby remains on the outside because of his refusal to bend to the rules of literary production imposed on black authors. But his own work demonstrates a facility to operate within the terrain of the publishing industry -- to sell his work to readers and to Hollywood -- in the face of Jim Crow. His work deserves our attention precisely because of its own brand of effective and subtle protest.