Spirit Photography: A Fireside Book of Gurus by Zephyrus Image 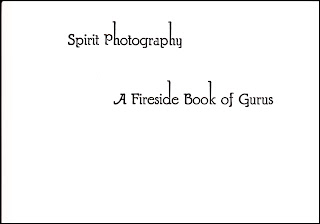 After looking through Spirit Photography: A Fireside Book of Gurus, I began noticing any mentioning of furniture, chairs especially, as I came across them in other places. First among these encounters was an interview with Robert Creeley in a 1995 issue of the Review of Contemporary Fiction. In his best Creeleyesque fashion, he comments upon

that kind of curiously melting edge of reality where -- not so much to conceptualize or not simply to symbolize -- but where the thought of can not only be as real as the actual but the two are almost shimmering. Where the habit of something -- what Granddad's favorite chair is -- is the chair it literally is, but it's endlessly permeated, vibrating in that other, so that a place has all the echoes of what its use has been. Everything is so contiguous and contingent that reality doesn't inhere in one focus.

An undeniable document of integrity mixed with a great deal of chagrin, Spirit Photography taps directly into the "curiously melting edge of reality" Creeley mentions, offering viewers with a rather tongue in cheek presentation that nevertheless demands formality. The table of contents lays out three sets of images: Lounge & Parlour Gurus, Dining Room Gurus, and Bedroom Gurus. The first set consisting of ten figures and the latter two, five apiece.

As for the Gurus appearing in this collection, their titles prove it's a rather eclectic bunch. Under Lounge & Parlour are found the likes of Lama Cans, Swami Ribber, and Amelia Earhart's Guru. Four Danish Gurus appear under Dining Room Gurus. Bedroom Gurus promises Wedding Sweet Swami, along with Ali Arty Faques. Somewhere along the way, while browsing through names such as these, many a reader is likely to be given pause. Flipping further ahead this slender Book of Gurus brings home the definitive and not-so-supple meaning of the acknowledgement given toward the end of the brief notational frontispiece of introductory text: "Little did this Western photographer know that many a swami and guru has defied the delicate waves of photography, as the following pages reveal..." Without doubt, these swamis and gurus demonstrate the aptness of Creeley's comments. In these images they're ever to be found "vibrating in that other," proving how earnestly indeed "reality doesn't inhere in one focus."

The other bit of text that I have recently come across with mention of chairs was an SFMOMA blog post by Juliet Clark concerning last year's "The Steins Collect" exhibit. Clark opens her post with an apology. "There are so many things to see in The Steins Collect, it would be unreasonable of me to suggest you notice things that aren't there, or are only there in photographs." She soon does exactly this, however, by drawing the attention of readers to two chairs found in large oversized photos of Alice B. Toklas and Gertrude Stein's sitting room, which are surrounded by the impressive art collection that makes up the bulk of the exhibit. And yet the chairs, which are Louis XV style re-tapestried by Alice B. Toklas with material displaying images hand-drawn and colored by Pablo Picasso, are not, as Clark tells us, "in The Steins Collect; they stayed at home, in the archives at Yale."

In the images of these chairs Clark notes she finds "art and domesticity are literally woven together, inseparable." Similar to the images found in Fireside Book of Gurus, the actual historical context of not the objects in the photographic image but the image itself has been inextricably altered.

...What are now museum pieces were once domestic objects, parts of private lives. Yes, on Saturday evenings the Stein apartments were practically public spaces: anyone who knew someone could visit rue Madame to worship at the altar of Matisse, or rue de Fleurus to sit among Picassos and geniuses and wives. But after the at-homes, Sarah and Michael and Leo and Gertrude and Alice were at home, living with these paintings. And these chairs.

The writers, artists, and other "geniuses" of Stein's company whose physical frames once graced these chairs pass on emblematic powers that are left preserved by way of the photographic image. More of sustained blessing than passing haunt. It is as if the image alone of the furniture, the very thing it is, arrives imbued with a certain dramatic perception that hints at the larger story the casual observer has no doubt missed. In the case of the Gurus, this may prove but a potential glimmer of imagined presence(s). The point being the furniture, or the image of it, as the case may be, is the only remaining evidence.

The caretakers behind the sincere shenanigans of Zephyrus Image were Michael Myers and Holbrook Teter, two artistic and quite literarily informed clowns of cosmic vibrancy. As this Fireside Book makes clear, with their publications Art and Life were played up. And as Clark poignantly reminds us, "On good days a museum may be full of life, but (despite best efforts) it isn't a living room; sooner or later, you have to go home." There's a general impression that Myers and Teter never bothered deliberating too much over the ramifications of whether, or the means by which, Zephyrus publications left home for a museum (or a library, or the homes of individual patrons, for that matter). A prime example of their enthusiastic embrace of what remained a homespun publishing affair full of wit, grace, and flair, Spirit Photography: A Fireside Book of Gurus nonetheless makes itself perfectly at home on whatever surface it comes to lie. Awaiting the next reader, or in this case, the next generation of readers, to discover a surprisingly serious side of the not-always-so-serious yet nonetheless genuinely frank endeavor of book arts.