Judging a Book by Its Cover: The Dispossessed

Ursula K Le Guin's novel The Dispossessed is the sort of book that could only have been written in the '70s. It drawls, it dawdles, it pokes around. It contains moments that might have been lifted verbatim from a Berkeley Teach-in. The premise, gradually revealed over the course of the book, is that the main character, Shevek is a brilliant physicist who comes of age on Annares, which is, essentially, a giant kibbutz planet. Everyone wears the exact same pants from the communal pants depot, strong emotional attachment to other people is discouraged, and everyone has to serve serious facetime down at the water filtration plant.

Shevek, after being intellectually stymied and thwarted by the communal bureaucracy around him, makes the unprecedented, scandalous decision to go to Urras, the long-estranged, capitalist-pig sister planet. So a lot of the book consists of a slow, tectonic grind between Shevek's communal upbringing, and Urras's copious hors d'oerves, shiny objects, and gender dimorphism.

Le Guin's father, Alfred Kroeber was head of the anthropology department at UC Berkeley for years. Her mother, Theodora Kroeber, wrote the classic Ishi, the Last Yahi, about the famous Native Californian who lived on Berkeley's campus as a living exhibit. Those looking for a slighly less rosy picture of Ishi's years at Berkeley should read Ishi's Brain by Orin Starn.

It is not difficult to see The Dispossessed as a thinly veiled first contact narrative between someone from a largely communal, tribal society and, oh... let's just say "Academia." It's a novel of ideas, basically, and thus has proven remarkably difficult to illustrate, despite having gone through roughly a billion cover iterations.

This is the "Perennial Classics trade paperback" -- which depicts, basically, Nevada. This is the edition that you will be assigned to buy if you ever take a class in "Myths of Dystopia/Utopia," since the text inside has nice fat borders with lots of room for scribbled notations. Plus it has the word "classic" on the cover in muted off-white text, so no one will be disrespecting you at the campus coffee shop and calling you Luke Skywalker and making Wookie noises.

This is the version that you get if you purchase the mass-market paperback -- in essence, you're saving seven dollars, but now everybody on the bus knows that you read science fiction. Candy-colored, man-astride-planet, author's name in sword-and-sorcery font sci-fi. This is also the sort of cover that is meant to entice people in airports, the sort that implies that there might be a ripping good yarn inside, possibly with some kind of lady who needs to be saved from a lizard. Not as egregious as the time I found a copy of Swann's Way that some publisher had tarted up with the obvious intent of fooling habitual readers of romance novels into purchasing it, but still, unless one considers a leisurely exploration of social structures to be "ripping," an impulse purchaser might come away a bit disappointed.

Here we have what appears to be Chuck Norris being pursued by a giant space piggy, and wearing the kind of fancy-looking body armor that would almost certainly be frowned upon on Annares. It's got that whole "sand in the contact lens/been tripping in the desert too long/doors of perception a little too wide" look to it. But think about it -- if you were in a store, a science fiction fan, and saw this book on display, you would think "that man is grimacing because he's about to drink his own pee out of that tube right there." Who knows how many people made off with this book, thinking that it was a Dune title that they hadn't read yet. Maybe Dune vs. the Flying Robo Shark Thing. An effective bit of mimesis.

This cover is actually my favorite - it's for a Spanish translation. Rather than picking up on the most obvious theme "man leaves one planet, goes to another planet" as the subject of the cover, it actually illustrates a metaphor that bookends the narrative -- that the protagonist leaves his culture empty handed, and returns empty handed. The slight angle and not-quite-rule-of-thirds quality of the composition makes this a really interesting cover to look at. The stark typeface used for the author name does a nicely subtle job of visually coding the book as a work of science fiction, as well as providing very saucy visual contrast to the naively-drawn open hand. The entire cover is a succinct visual metaphor for a story that is ultimately about the cultural exchange between a very rough, DIY society with a very polished, technologically savvy one. 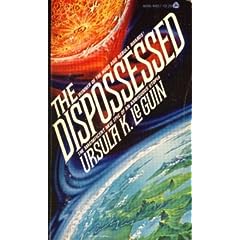 And, finally, the original cover illustration. Like the first three covers, this cover could shill most Asimov-era science fiction -- it's got the planets, the diagonals, the orange nimbus. Some cover illustrator, somewhere, painted a hell of a lot of orange nimbuses in the '60s and '70s. I hope they sent their kids to college on those nimbuses.

So old, it's on the verge of... hell, this is probably back in style already. If you read this on the bus, and were wearing the right shoes, I bet someone would fall in love with you.